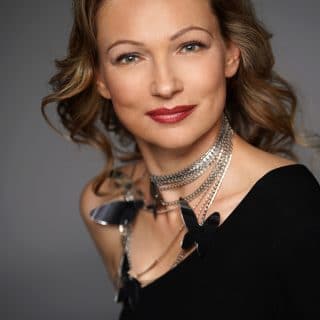 Larissa began her musical studies with the piano at the age of five in Moscow (Musical School “Prokofiev”). She is soloist in various child choirs since the age of 6, which are performing in many prestigious places such as the Tchaikovsky hall in Moscow. Back in Switzerland at the age of 13 she started to play guitar and from 1997 she was the leading soprano at the orthodox church of the Moscow Patriacat, then at the Cathedral of the Cross in Geneva. With Alexander Diakoff, who explores ancient and liturgical music repertoire, she records the Rachmaninov Vespres and the Tchaikovski Litugie. In 2004 she enters the Geneva opera studio “Gioco Vocale” directed by P.A.Gamba, where she sings various roles such as Sandmannchen in “Hansel und Gretel” (Humperdinck), Ilia from “Idomeneo”, Servilia from “La Clemenza di Tito”, Cherubino, then Susanna from “Le nozze di Figaro” (Mozart), Messagera from “Orfeo” (Monteverdi).

Along with the baryton Sacha Michon she created the “Transsibirskaia” show that premiered at the Richard Wagner festival (“Les Salons” theater in Geneva) and is on tour till 2017. Since 2013 she’s part of the solist troupe of Operami (www.operami.ch).